Where there was one, now there are three! GM Vakhidov 2546, who had usurped the previous leader GM Mista 2567 on the previous day, was only able to hold his sole first place for a single night before facing tournament favourite, GM Berkes 2650, who efficiently defeated him with the White pieces. Mista. Making up for his loss on the previous day, relieved Arkell 2490 of his position at the top of the English contingent and joined Berkes on 5/6. Meanwhile, GM Fodor 2492 [below, left], with White, beat IM Krishna 2367 in a game in which, although hard fought, he always maintained the upper hand. So we now have 3 players sharing first on 5/6 with the prospect of an exciting tussle in the final rounds. 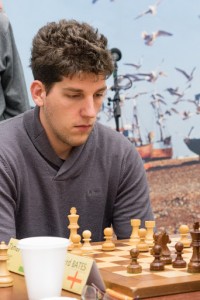 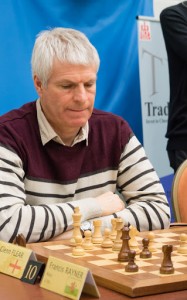 The leading English participant is now GM Glenn Flear 2459 [above, right] who won himself a place in the chasing pack on 4.5/6 by defeating his compatriot GM Gormally 2506. Flear got off to the worst possible start in this tournament, being the victim of an upset in round 1 when he lost to FM Robin Cunningham 2205, so his rise through the rankings is a tribute to his determination. Gormally meanwhile, as he bemoans on his Twitter account, suddenly finds himself the lowest ranking English GM on 3.5/6 which shows what a slippery pole a Swiss system event can be. He will no doubt seek to remedy that unfortunate situation in the final rounds.