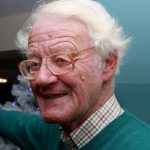 Con Power was one of the unsung heroes of British Chess but as Director of the world’s oldest chess event he devoted hours of time and effort to keeping the Congress alive and maintaining its reputation as one of the major international chess events.

Con took up chess aged 14 and later joined the Hastings and St.Leonards Chess Club.  He first became involved in chess administration in the 1970’s when he ran the Hastings  Junior Chess League consisting of 20 school teams from a wide area ranging from Rye to Eastbourne.  He became Secretary of Hastings Chess Congress in the late 1970’s and succeeded Jack Hatton as Congress Director in 1983.  He was a Trustee of the Hastings Junior Education Fund and also organised Muffin Club and Maureen Charlesworth chess events for novice and social players.

Since 1983 Con worked quietly and inconspicuously to ensure the smooth running of the annual Hastings event.  This was no easy task.  He coped with regular changes of venue and financial situations – ranging from the glittering events in the days of the commercially sponsored Premier Tournament at the Queens and other hotels, to battling with high tides on the Pier.  Highlights must include the Centenary celebrations in 1995 when a summer Congress was also held including the Intel World Qualifier, Living Chess on the Pier and a world class rapidplay event on the George Street open-air board.  Whatever the event, Con always made time for players of all levels – grandmasters and newcomers to the game alike.  It was this quiet, fair approach that was appreciated by Congress participants as became evident in feedback after each event.  His wife, Claire, was also a great support and became a familiar contact with players as she managed the “switchboard” that was their home telephone, at times deluged with calls.

In 1995, Con’s dedication was recognised when he was awarded the British Chess Federation’s Award for Services to Chess.  In 2015, at the time of his resignation, he was awarded the English Chess Federation’s President’s Award for Services to Chess … so good they recognised him twice!  He was also the first to receive the FIDE International Chess Organiser title.

Con was born in Deal in Kent and attended Dover Grammar School.  He worked for the Civil Service and moved to Hastings in 1967 where he married Claire.  His two sons and two daughters completed the family.  Chess remains in the family with his son now a chess organiser and grandson playing competitively.

He retired as Congress Director following the 2014-15 Congress and was diagnosed with cancer early in 2016.  He remained at home facing his illness with dignity and courage and died with his family by him on Friday 6th May 2016.

Con’s calm exterior belied the hours of anxiety he went through in the weeks and months before each event.  However, despite the difficulties of running an international event with ever diminishing funds, Con was an easy colleague to work with who will be sorely missed by them and all those chess players around the world for whom the name “Con Power” will continue to be synonymous with “Hastings”.