The weather was not helpful on Sunday and there were a few transport problems but the chess continues and the weekend congress finished of which you can find details below. 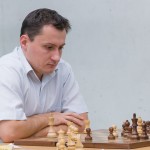 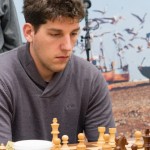 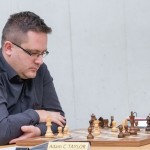 There were lots of players in with a chance of a prize or a norm as we went into the seventh day of the masters. At the start of round 7 there were three players sharing first place on 5/6, GMs Berkes 2650, Mista 2567 and Fodor 2492, with a group of five just behind on 4.5/6 meaning that no-one had so far stamped their authority on the tournament by speeding ahead of the pack. Lots of candidates for the prizes! Under these circumstances the chess fan might hope for lots of aggressive play in Round 7 with the players intent on out-pacing their rivals. However professional players sometimes have other priorities and that seems to have been the case to an extent here.

On Board 1, the tournament favourite Berkes was playing White against Fodor. One might have expected a real battle as there was a lot to play for but, in the event, the players agreed to share the point just out of the opening when there seemed to be plenty of play in the position. From the outsider’s point of view this seems a puzzling decision on the part of Berkes as he had the White pieces, will lose a few Elo points as a result and remains firmly within rather than ahead of the leading pack for the prizes! GMs sometimes move in mysterious way!

The third leader at the end of Round 6, Mista, also drew but after a bit more of a battle. Playing White against GM Sulskis 2535, he found a well-prepared opponent who was well able to maintain the balance and the two GMs played each other to a standstill. A draw was an appropriate result.

Meanwhile GM Vakhidov 2546, who had briefly been sole leader but was now trailing by a ½ point, had the Black pieces against IM Bagi 2440 who has maintained a high position through-out the tournament. It was something of a battle but the GM eventually triumphed and thus joins the leaders on 5.5/7.

On Board 4 GM Romanishin 2462 faced English GM, Glenn Flear 2459 and a competitive battle it was. Flear held the draw however and both players maintain their positions just behind the leaders to be joined by others including GM Hebden 2469 and FM Peter Batchelor 2307 who defeated GM Arkell 2490.

So, going into Round 8, it can be seen that there are still plenty of players with a possibility of a top prize and quite a few Norms within reach. All to play for then!

The commentary has been going well and attracting a good audience which reached 1200 yesterday. Much thanks is due to GM Chris Ward the excellent and entertaining commentator, and also to Chess 24 who have been relaying the games with their usual efficiency and expertise.

The Weekend Congress finished on Sunday and here are the results!

Three games from the Maters annotated by IM Jack Rudd —