So the penultimate round of the 2015/16 Hastings Masters and there were still a very large pool of players who could win a major prize and with the added spice that a number of players have the possibility of achieving a GM or IM Norm.

On board 1 GM Mista 2567 faced GM Berkes 2650 and, given that they were sharing 1st place with two others, chess fans were hopeful of a real fight. This was not to be as the GMs decided on a risk free policy and agreed a draw after a mere 10 moves. This left the opportunity for either GM Vakhidov 2546 or GM Fodor 2492 to seize sole 1st position going into the last round should they choose to make a fight of their game and this they duly did. Fodor, with Black, attempted to launch an attack against Vakhidov’s castled King down the h-file but the threat proved illusory giving White the chance to expand in the centre and then open up Q-side with a well-calculated exchange sacrifice. A King hunt followed with the Black King pursued all the way from the Q-side to g4 at which point he abdicated rather than face the indignity of being mated. This outcome put Vakhidov in sole lead, a position he had held briefly a few rounds before, and therefore in a very strong position to win at least a share of the first prize. IM Jack Rudd’s annotations to this crucial encounter appear below in this article.

Meanwhile GM Khenkin 2605 defeated GM Romanishin 2642 on Board 3 and Sulskis 2535 won out over IM Nagy 2403 on Board 4 and GM Flear 2459 was the victor over IM Krisha 2367 on Board 6. The victors in these games now join Mista and Berkes in equal 2nd and, unfortunately for both Nagy and Krishna, who have both had an excellent tournament, these losses rule out their achieving GM Norms. There were better results for FM Batchelor 2307 and FM Cunningham 2205 whose draws, respectively, with GMs Hebden 2469 and Pap 2551 keep their chances of an IM Norm alive.

The Hastings Blitz event was also held yesterday and with GM Vakhidov and IM Gluckman finishing equal 1st on 5.5/7. English players GM Arkell and FM Longson were among the group on 5/7. All juniors in the blitz received a free Chess24 flash drive and Tom Brown won a tee-shirt for the best UK performance. 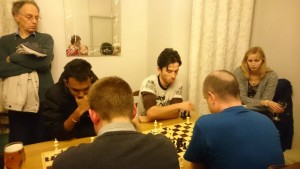 Annotated games from the masters —