The 91st Hastings International Chess Congress opened on Monday 28 December 2015 at Horntye Park Sports Complex, and now two rounds have been completed in the Masters event.  Cllr Bruce Dowling welcomed players to Hastings from around 20 countries, including Trinidad and Tobago, Argentina and Australia.  A welcome also came from Dominic Lawson, President of the English Chess Federation and Paul Smith, Chairman of Hastings Chess Congress. 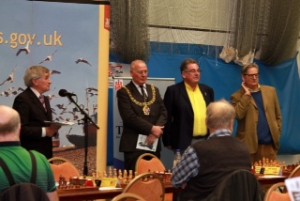 This year sees the introduction of a new sponsor, Tradewise Insurance Services, a subsidiary of Tradewise Insurance, Gibraltar, who sponsor the very successful Gibraltar Chess Festival and who were represented by the Marketing Director of Tradewise, Wayne Bradshaw. Mr Bradshaw said Tradewise were pleased to be involved with the Hastings Congress and look forward to future events. The company is keen revive the fortunes of the Hastings Congress and encourage chess players, in particular younger players, to compete and reach their potential. Tradewise are joint sponsors with Hastings Borough Council to whom we owe thanks for their longstanding support.  Additional support comes from The White Rock Hotel, The Lansdowne Hotel, and KC Computers.

Spectators are welcome at the event and there is a live commentary each day given by English Grandmaster Chris Ward – entry to this and the main event is free.  Masters games begin each day at 14.15 and the commentary starts at 14.45.

The first round of the Masters began promptly at 2.15 after the opening ceremony. The favourite this year is GM Berkes 2650 followed by GM Khenkin 2605 and then GM Mista 2567. Leading the English challenge are GMs Gormally 2506, Arkell 2490, Hebden 2469, Flear 2459 and Williams 2439. A particularly welcome participant in the Masters event is the legendary Russian GM, Oleg Romanishin 2462, who won Hastings in 1976 and the congress welcomed back many regular visitors to Hastings as well as a good few newcomers.

Being a seeded Swiss tournament, round 1 saw the top half of the table playing the bottom and thus, as usual, there was the potential for upsets. The stars on the top 5 boards escaped unscathed with the first surprise coming on board 6 where the experienced English player, John Anderson 2247, playing White, managed to hold GM Sulskis 2535 to a draw. Not such good news for the English contingent was GM Arkell drawing with White against Rolvag 2221 on Board 9 and the main upset of the day came on Board 12 where GM Flear lost with the Black pieces to FM Robin Cunningham 2205. Romanishin, on Board 11, started well, despatching English FM David Ledger 2212.

Round 2 saw the favourites already facing challenging opposition and this was reflected in the results. On Board 1 English GM, Simon Williams, drew with tournament favourite, Berkes, and on Board 2 IM Bagi 2440, held second favourite Khenkin to a draw with the Black pieces. On Board 6 Cunningham, having beaten a GM in Round 1, drew with another GM, Gormally, in round 2 and will presumably be very happy with his start. The first real upset was Hebden’s loss with the White pieces to the young FM Karthik 2310.

With a number of draws on the higher Boards in round 2 we find only 5 players on 100% going in to Round 3 among who are GMs Mista, Vakhidov 2546 and Fodor 2492. FM Karthik, having beaten Hebden in the previous round joins them with, really very surprisingly, South African junior, Paul Gluckman, despite meeting quite challenging opposition. He has an FM title, by winning his age group in the African Championships, but is currently rated a very lowly 1742 (!) and has never been rated much higher than this. He will certainly be tested today as he plays Black against tournament favourite, Berkes, on Board 3.

As well as the Masters event there are also shorter tournaments for more casual enthusiasts and there is also a Weekend Congress which runs from the evening of Friday 1 January 2016 to Sunday evening. There will be a Blitz event at the White Rock Hotel on 4th January 20.30 hrs. Further information from the Congress Office at Horntye Park Tel: 0758 214 9239 Email: pae123@aol.com

Games from Round 2 annotated by Jack Rudd